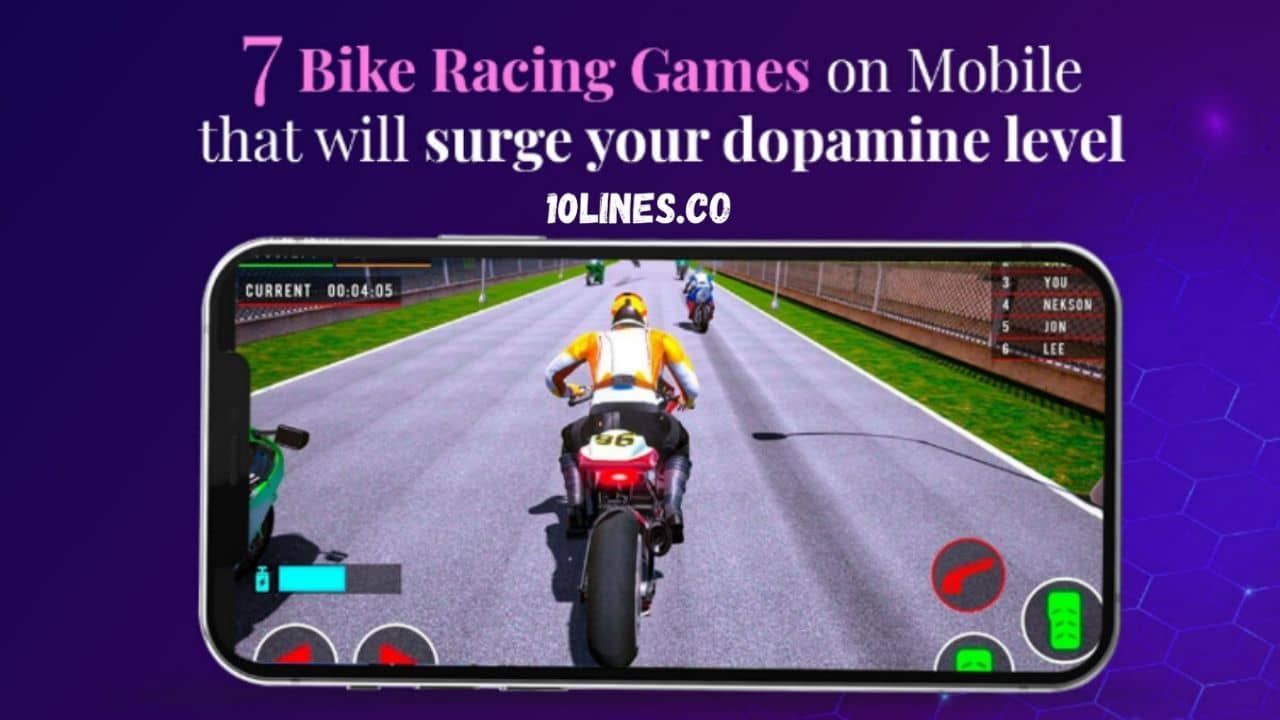 Gaming on mobile devices has become a more prosperous and fuller experience with high graphics and smooth performance. Action games are pretty popular among users as devices have become better with faster processors and better RAM management. Amidst the vast catalog of games in the stores, people are often provoked to play mobile racing games. Below is a list of some of the most exciting bike racing games hand-picked especially for you.

Racing Moto is an exclusive bike racing game that has garnered downloads of over 50 million on the play store. It is trendy because it is available for play offline. The game is compact and straightforward for Android devices. The player can choose from a selection of 3 bikes in the game. The initial motorbike is available on the game’s installation, but the other two options are unlocked after leveling up and accomplishing objectives in the game. The player can maneuver the bike through the traffic by tilting the device’s screen. The acceleration of the motorbike increases with each level. The score boosts if the moto is continually accelerated. The meter of boosting is displayed on the top right corner of the screen. All these features add to an exhilarating experience of hand-held racing.

This game offers the player 11 variable motorbikes to choose from and a world full of customization with over 150 different challenges. The best factor about Real Moto is its real-time world record competition. This action makes players glued to their screen for hours in an attempt to level up on the leaderboards.

The game is very realistic with artificially incorporated motorcycle sounds and the speed of the vehicles. The mobile game has impressive graphics with a speedometer and other digits next to the on-screen rider. The game gets more difficult as the player levels up in the campaign mode. The tracks also change according to the difficulty the player is competing on.

This racing game is a multiplayer racing game that allows the players to race other bikers online in a race to the finishing line. The tracks of this game are incredibly curvy and have sharp edges that challenge even the most seasoned gamers. The players have to be very skilled in applying the brakes and dodge cars to get ahead of their rivals.

The players have to follow a map on the top left of the screen while decelerating and accelerating their bikes to get to the finishing line.

Apart from the thrilling in-game experience, players have the chance to win fabulous prizes while playing this game.

The gameplay is very immersive with the presence of high global competition. To get a first-hand experience, players should download the bike race game right now.

The game is on a highway jammed with traffic, and the player has to dodge the vehicles while getting ahead. The game offers four different highways that the player can drive on. Boosters are available in the game that allows the player to accelerate at an insane speed. Players can choose between either the Fugitive Mode or the Arcade Mode. The element of choice is aplenty in this game where there are ten variable sets of characters where each one has their unique type of motorbike. As the player progresses, they can unlock the characters and modify them to their will.

Racing Forever stands as one of the most desired bike racing games. Four different camera angles are available for the player to drive in. The player chooses from a panel of four teams with several levels to play in. With so many features and immersive gameplay, the player is never bound to get bored. The player can control the bike’s movements by touching the screen or tilting the device. The player can play through 16 highly competitive levels that are unlocked consecutively.

This motorcycle game is not for the average player as it primarily involves riding hydro jets rather than the usual bike. According to gadgets360, Riptide GP, Wikipedia brings a refreshing take on typical motorcycling games with levels filled with waterways and flooded cities in a pioneering setting.

The players can choose from three modes: online mode, career mode, and the favorite multiplayer segment. The game offers many vehicles and locations that are visual to the player’s eyes and never a bore.

The player can use the in-game money to purchase unlocked vehicles and characters as the
player levels up.

This racing game is on the streets of Tokyo, where the player can ride a GP motorcycle. The game aims to avoid oncoming traffic and competitive GP bikes and achieve more kilometers than his rivals. The game is a simulator that records the player&#39;s score for world competition.

Gasoline is a crucial factor that the player must consider while racing in-game. The simulation is very close to an actual biker’s problems, and the excellent graphics add more to the immersive gameplay. The representation of Tokyo city and its temples and buildings bring the game closer to life.

Motorbike Driving will be your favorite game if you are into arcade-style motorcycle simulators.

To conclude, if someone is looking to kill some time at the leisure of their home, then they should pick out some from the list above and start gaming. The games on the list are mainly free to play, where some of them have a value on the store with in-game purchases involved. Online Bike Racing Games